I was born in 1976 in Atlanta, GA.  I’m a proud “Grady baby”.  I was around the age of 8 when I began to understand the tradition and legacy of Atlanta.  If the streets could talk, it would share stories of some amazing men in this city like Alonzo Herndon, Herman Russell, and Hamilton Holmes to name a few.

We are doing great work in the city of Atlanta through L.E.A.D. I often laugh because I know that there is no way that L.E.A.D. would have existed when I was a child.  Simply because there was no need.

I grew up playing at the Cascade Youth Organization (C.Y.O.) and we had hundreds of youth in year round programming.  There were thousands of African-American boys playing baseball throughout the city.  My C.Y.O. coaches were great mentors and put me on a life and baseball development path that I will never forget.

I was a member of a Boy Scouts Troop out of my church at Elizabeth Baptist Church on Martin Luther King, Jr. Drive.  I became a Webelo Scout before my baseball passion and commitment caused conflict with my scouting schedule.  My scout masters were great mentors and put me on a life and service path I will never forget.

I was a student at Grove Park Elementary School within Atlanta Public Schools (APS) from 1st through 5th grade.  I excelled academically and was exposed to some of the best that Atlanta had to offer.  I flew on a plane for the first time as a second grader while in Mrs. Jacob’s class.  I visited the Herndon Home as a third grader in Mrs. Blue class.  My teachers were great mentors and put me on a life, academic and civic engagement path that I will never forget.

In order to make impact in the inner city of Atlanta, you must close the history gap.  We all want to serve and make Atlanta a better place.  Atlanta has thousands of non-profit organizations that would have never existed 20-plus year ago.  To that end, you have to understand the history of the inner city  of Atlanta before you help the youth inside of it.  Often times, we place our flag of support in the ground without speaking to the pastors, teachers and community leaders that have been grinding here for years.  It all comes down to respect.

It takes a village to raise a child but if we don’t close the history gap, we can be viewed as an enemy. 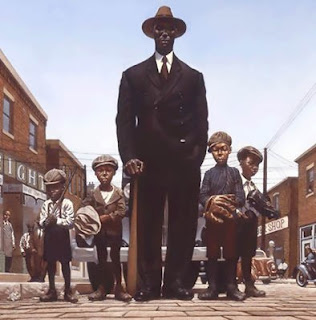