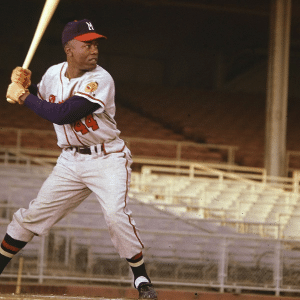 The first expansion of Major League Baseball from the Northeast was when the Brooklyn Dodgers moved to Los Angeles. Jackie Robinson was born in Cairo, Georgia, and moved to LA as a child. He was a multi-sport star at UCLA, as well as a Second Lieutenant in the United States Army.

Many would assume that Robison would be at the top of my list of heroes because I was born in Georgia like him. He continues to be an inspiration to many because he became the first African American to play in Major League Baseball (MLB) in the modern era.

I was born and raised in a low-income community of Atlanta called “Bankhead.” Henry “Hank” Aaron was my hero. Aaron was born in a low-income community in Mobile, Alabama referred to as “Down the Bay.” He started his professional baseball career in the Negro Leagues with the Indianapolis Clowns. His Major League career began with the Milwaukee Braves, where he arguably was the best baseball player in the world.

According to NPS.gov, “During [Ivan] Allen’s administration, Atlanta was dubbed “the City too Busy to Hate.” In the summer of 1966, Allen tried to live up to that image by going into the black inner city community of Summerhill to try to calm racial tension.

In 1966, The Atlanta Braves, under the skill and courage of Hammerin’ Hank Aaron, lost to the Pittsburgh Pirates 3-2, becoming the first Major League sports team in the South. More than anything, the game proved that Atlanta was “the City too Busy to Hate.”

Because Jim Crow Laws prevented the interaction of Blacks and whites in the South.

Hank Aaron changed laws by the way he hit balls.

According the Wikipedia, The Atlanta Braves laid claim to the name “America’s Team.” From 1977-2007, their games played out on TBS, a nationwide cable TV system. The exposure helped the Braves build a fan base across the US, especially those that were far removed from a Major League Baseball team.

The other team to get national cable exposure on the SuperStation was the Chicago Cubs. During the hot summer days in Atlanta in 1984, I would regularly watch the Cubs in the day time and the Braves at night.

I fell in love with the Cubs because they had the best record of the two, becoming National League East Champions in 84.

Today, along with my wife, Kelli, we are leading 250 Black boys grades 6-12 in Atlanta to become Major League Citizens. On Feb. 10, 2023, the world will hear an announcement that is going to change the game of athletics forever.

The world is waiting.