20/20 vision is said to be normal vision. At age 43, I find myself squinting a lot more these days. It’s been a while since I’ve had a sight test but I bet I’m moving towards needing glasses to see.

With regards to discerning my future for the year 2020, there are 20 people that I would like to meet. Upon meeting them, I already have the question prepared that I want to ask them.

1. Gucci Mane – What’s your response to “successful” adults that tell youth that want to become a rapper that they should strive to do something else?

2. Big Meech – What’s the best advice that you received from someone when you were a child that had you listened, would have prevented you from starting the Black Mafia Family?

3. T.I. – What are the principles of “street life” that are transferrable for launching a new business?

4. Barack Obama – Using 30 words or less, why can’t we close the racial wealth gap in America?

5. Donald Trump – What was your initial reaction to the “Make America Great” mantra when it was shared with you to be used for your Presidential Campaign?

6. Tyler Perry – How do you define grit?

7. Brené Brown – If courage were an animal, what would it be?

8. Condolezza Rice – Using 30 words or less in a sentience, what’s the difference between the Republican Party and the Democratic Party?

9. Serena Williams – As a child, what were you considering as a backup plan if you didn’t become a professional tennis player? 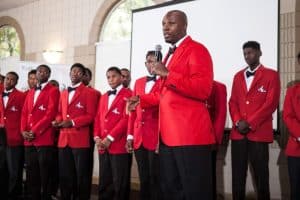 11. Nick Saban – If you were offered and accepted the head coaching position for the Atlanta Falcons, what would be the first thing that you would do to help us win a Super Bowl?

13. Ed Bastain – Atlanta being regarded as “The City Too Busy to Hate” helped us prove to be “more progressive” than other southern cities during the 1960’s. The slogan was great for business. How do you feel about Atlanta having the greatest income disparity in America?

15. Tucker Carlson – What’s the fundamental difference between Fox News and CNN? How are they both the same?

16. Ibram X. Kendi – “How to Be an Antiracist” is a powerful book that you wrote. What’s the most disappointing feedback that you’ve received from an African-American reader about the book?

17. Simon Sinek – What’s the craziest title for one of your books that you’ve considered but didn’t pull the trigger on?

18. Ta-Nehisi Coats – What are the top three things that a U.S. President must do to prove that he/she believes that Black Lives Matter?

19. Rob Manfred – What is the major consequence of having such a low number of African-Americans that are competing in baseball at the Major League level?

20. Michael Eric Dyson – What book are you reading right now?