The world had it’s eyes fixed on Atlanta, GA when we hosted the Olympic Games in 1996. I was playing my second year of baseball in the Chicago Cubs organization and didn’t get a chance to be a part of history.

We are the proud home of Coke, Delta, Chick-Fil-A, UPS and many other corporate powerhouses. We are considered an international city by many people throughout the world.

I went to Centennial Park in downtown Atlanta on Monday and saw thousands of people there enjoying the beautiful weather. Families holding hands.  Guys teaching their dogs new tricks. My family played 4-square for at least an hour inviting strangers to participate in the fun.

It wasn’t until we got over to the Olympics rings and found out where the action really was. There were kids of all ethic backgrounds playing in the water as it shot up in the air and cooled off the crowd during a hot Atlanta day. 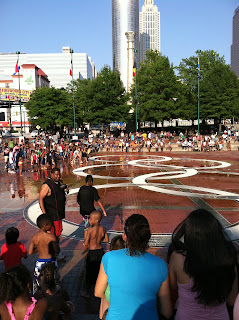 My eyes were fixed on two African-America boys that appeared to be in the first or second grade. Not passing judgement but it made me realize that the Atlanta Public School System only graduates 34% of it’s African-America males from high school. Without consistent mentors in their life like I had, the evils of this international city can soak them up like the sun does the water from their bodies on that hot day and they will be lost forever.

The only reason that I was able to get a good sleep last night is because by the grace of God, we have L.E.A.D.  School will start back in August and I believe that I will see these young men again giving them an opportunity to play catch like Coach Joshua Butler did for me.

I wake up everyday being open to others pouring themselves into me to make me great. I also look for opportunities to help others in their life journey. It is that attitude that makes Atlanta so attractive to the world.  It is called the “Atlanta Way”.