Lebron James has done it again. He predicted multiple championships in Miami and two rings are a sign of what’s to come.

As he held the championship trophy in his hands, he talked about being raised in the inner city of Akron, Ohio and how he feels blessed to walk into the arena to see “James” on the back of his jersey. 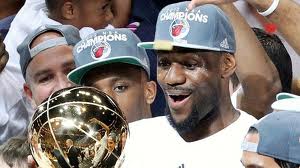 LeBron, Heat repeat as champs
He plays with reckless abandon every night to win that coveted trophy and hasn’t been shy about his desire to be the greatest basketball player ever.

If I had a brief moment to speak to Lebron, rather than ask for an autograph I would ask “why do you play with so much intensity and so much focus?” His answer could be the secret sauce behind the change of culture and mindset of youth in Atlanta.

What would Atlanta look like if graduating from high school and college were coveted and each student wanted to be the greatest servant leader to ever live?

Making this paradigm shift is going to require the right questions to be asked of the right people. The answers lie within the minds of the students within the Atlanta Public School System.

Our L.E.A.D. mission is to create positive outcomes for at-risk minority youth by leveraging the relationship between academics, athletics, and service. With the support of our partner Jostens, we presented our 2013 L.E.A.D. Ambassadors graduating class with Life Champions rings: this class consisted of four high school grads and our first Ambassador college graduate. We also presented Community Champions with rings such as Atlanta Braves President John Schuerholz and Georgia’s Own Credit Union President Dave Preter.

We are building a bridge between our Ambassadors and the business community. Because of Josten’s generous spirit, our young men now have something in common with some of the top executives in the Atlanta community: They are champions for a better Atlanta.
Lebron James is truly a champion and we can use his legacy to direct a new generation of college bound, civic minded African-American males from Atlanta.

You spoke loudly last night, Lebron, and we heard you clearly in the A.