My wife, Kelli and I have been working over the last ten (10) years to empower Atlanta’s inner-city young black men to become leaders and to lead lives of significance. We have seen young men in our program grow and have great success. However, the underlying problems continue to exist that stifle our ability to significantly alter the narrative of young black men living in the inner-city communities of Atlanta in general. No amount of money or human resources will resolve these problems, change the narrative, or create a positive environment for growth and success until uninitiated adult mentors and failing Black male youth partner in “grit by association”, or are working with relentless determination toward a common goal from the same page of the playbook.

People create problems, and they have the ability to resolve them.

We have problems in the inner city of Atlanta that have been created by people over many years. Jim Crow laws played a big part in economic and social disparity among Blacks and Whites. Although Jim Crow laws no longer legally exist, the inequitable intentions can be seen in redlining, gentrification, negative rhetoric and aggression. They continue to negatively affect poor and Black communities.

For instance, in Atlanta, if you are born into poverty you have a 4% chance of making it out according to the Atlanta Metro Chamber of Commerce. Additionally, too many Black males in Atlanta drop out of high school, are unemployed, and go to jail as a result of the negative cycle of oppression heaped upon the Black community by Jim Crow, and later, laws.

Despite our abilities as problem solvers, these problems persist year after year.

Resolution of the same old problems plaguing Atlanta – that stand in the way of our progress – will only be solved by educated empathetic people working together within the same context, and with the same grit, passion and purpose. More specifically, it will only work when mentors and mentees attain grit by association. For that to happen, each person first needs to find his or her context. 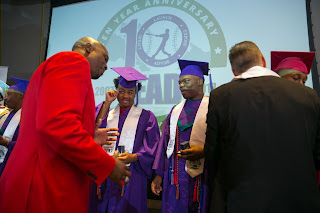 The responses to the following three questions establish that context and lead to understanding “why you exist”, “your purpose”:

1. Everyone is suffering with something. What are you suffering from?

2. There are endless amount of problems in the world. What world problem do you want to help solve?

3. Life is complex but doesn’t have to be complicated. Why do you want to continue to live?

Participation in this exercise by the mentor and mentee is imperative to identify the commonality of purpose, or the association between them. Once established, acknowledged and understood, then each participant’s grit, or the relentless pursuit of the common purpose, becomes grit by association, and is more meaningful and stronger. Growth follows, and problem resolution becomes inevitable.

Solving Atlanta’s problems will not happen overnight, but they will be resolved overtime by taking conscious actions together toward the same goal. Lewis Carroll said “If you don’t know where you are going, any road will get you there.” I think the same holds true that: “If you and your partner want to end up together in the same place at the same time, you need to walk down the same road, in tandem, to the same destination.”