We were up at 6:30AM preparing to get to the stadium for Day 3 of the Perfect Game National Showcase.  Mendez’s game was at 1PM.  The excitement remained in the air for all of the young high school players that are getting the opportunity to showcase their talent in front of hundreds of scouts.
Once again, the sun is beaming early in the morning.  I sat back in my new favorite shaded spot along the first base side of the field in order to get a good camera angle.
Mendez was back in action again catching some of the best high school flame throwers.  He was doing well until after 10 pitches when he began to collapse.  Dehydration began to kick in and caused him to leave the game defensively.  He did get two at bats today though.  He didn’t get any hits today but he hit every ball hard between shortstop and 2nd base which is an indication of how short his gotten.  So far, he is 1 for 3 with no strikeouts.
We are getting some much needed rest tonight and looking forward to tomorrow.  Today was special for me as well since I had the opportunity to discuss hitting with Hall of Famer Cal Ripken. 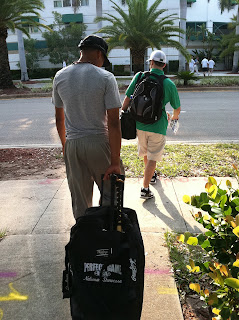