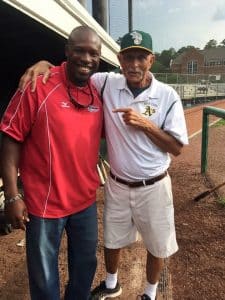 A Coach is someone who moves others. In fact, before the word coach was used in the context of sports, it was reserved strictly for transportation. A coach moved you to where you were supposed to be. Today, oftentimes because of the fear of accountability, not so much.

This morning, I found out that Coach Mike Hurst passed after a long battle with cancer. Coach Hurst was a white man and I am a Black man. To some, race doesn’t matter, but to me, it did when I met him at age 16. He was recruiting me to play baseball for him at Georgia State University (GSU). At the time, I was living in the Bankhead community in the inner-city of Atlanta and was one of the best players in the state.

I love Atlanta, and at that time in my life, I couldn’t see myself leaving the city to attend college. I was also very immature. In a lot of ways, I needed the support of family and the familiarity of my city.

I was being recruited by several predominantly white institutions (PWIs) across the country and all of the top historically black colleges and universities (HBCU)s. Ultimately, I chose GSU because of Coach Hurst—a move that upset a lot of HBCU coaches.

When I reflect on why I chose Coach Hurst, the answer is in his last name:

Help is what you offer people when they are weak. As a teenager, I lacked the social-emotional learning capacities that I teach young men today. I wasn’t as strong as I needed to be in the areas of self-identity, social connections and social skills. Subsequently, and to the disappointment of Coach Hurst, I failed out of GSU at the end of my freshman year. Yet he still continued to help me—even through adulthood.

Prior to Coach Hurst, as an African-American young man, I had only a couple of meaningful relationships with White men. The vast majority of the people I knew were Black. Most of what I knew about White people, I learned from watching television. And a lot of that was negative. Coach Hurst helped me to see that race relations is not the problem—white supremacy is.

Coach Hurst was uncompromising on values like being punctual, prepared, making promises and keeping promises. Being a college student-athlete was hard for me. I learned a lot from my failures, and as an adult, he constantly reminded me that even though I didn’t get my degree from GSU, I was not a failure. Today, I am a “consequential, uncompromising on values” type of coach just like he was.

Respect is earned. The respect that Coach Hurst showed me when I became a coach was truly meaningful. Since the first day we met, he became my friend, confidant and advocate.

Coach Hurst was a great coach because he was a servant first. He made so many sacrifices with his time, energy and expertise. His beautiful wife, Carol, can attest to the late nights coming home from games and practices. He probably mentioned my name several times in some late-night rants trying to figure out how to motivate me to meet expectations in the classroom and on the field.

GSU didn’t have a large financial budget, but we had a really nice field, located several miles away from campus in Decatur, Georgia. He cut the grass and painted dugouts. You name it; he did it. He also brought good people together to become members of the GSU Panthers family.

Coach Hurst was tough to play for. He knew what you were capable of doing and he designed practices for you to become your best. Then he’d put you on the field to do your best. When I didn’t do my best, he was relentlessly tough on me. If I did something wrong in private, we dealt with it in private. But if I did it in public, rest assured he would deal with it publicly. Toughness develops character.

To Ms. Carol, may God continue to bless you. You are an amazing woman. You were there for Coach until he took his final breath. I am inspired by your love and commitment to him.

My friend and fellow GSU alum Rusty Bennett told me this morning about a conversation he had with Coach Hurst last year. Coach told him he wasn’t afraid of dying. He was dealing the most with the fact that he would miss all of us. We miss you too, Coach.

Rest in peace, my friend, my advocate, my Coach.