It’s widely accepted that sports is a microcosm of life. I would argue that no sport imitates life quite like baseball. If you stop to think about it, we spend our entire lives in the batter’s box swinging at whatever life throws our way. When I first fell in love with baseball over 30 years ago I dreamed I would one day have the on-field talent and toughness of Jackie Robinson and the off-field charisma and consciousness of Martin Luther King Jr. Little did I know my entire life would be shaped by an attempt to right baseball’s biggest wrong, the lack of Black boys.

In case you’re wondering, this blog is NOT meant to shame America’s game. Instead, it’s meant to put a fence around decades of challenges faced by deserving Black boys who simply want their chance at bat. Apologies if this comes at you like a brushback pitch but my true aim is to spark a conversation that will bring forth solutions.

For decades older fans, coaches and casual observers have suggested three reasons to explain the sharp decline of Black boys in baseball:

I’m the first to admit, Black boys need to take responsibility for their own success. However, years of first- hand experience has completely persuaded me that reversing the above “reasons” will not magically level the playing field. In my opinion, the problem exists largely because Black boys face three elusive pitches that they just can’t seem to hit:

First the fast ball — White Is Right! This is the fastest pitch most black boys will ever see. It comes right down the plate in the form of the decision to play for a white coach versus a black coach. Individually this decision appears inconsequential but collectively it adversely affects the Black talent pool. Black boys are inclined to think the grass 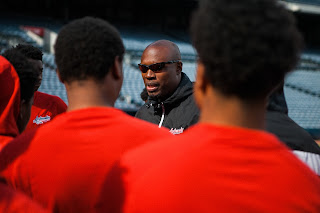 is greener on the other side- meaning White coaches provide better instruction, more favor with scouts and a shield from the label that Black boys are lazy and not coachable. As a teenager, I was guilty of deciding that White was right. At the time, it was a selfish decision to protect my ego. Fleeing from my fears, I abandoned my community and planted the seeds of my talents in a garden that wasn’t mine. As a result, there was no harvest for the upcoming generation of Black boys. That cycle continues. Instead of thinking legacy, many Black boys are consumed with winning.

That brings me to the second pitch, the change up— Winning Is Everything! The reduced speed and deceptive delivery of the change up confuses black boys timing. At an age when they should be intensely focused on self-development, they focus on winning games instead. Anxious and afraid they won’t have access to scholarships or major league scouting opportunities, black boys make the fatal mistake of equating wins with self-worth. The relentless pursuit of winning brings on an identity crisis causing them to bankrupt their personal identity in exchange for the identity of their team. Their “win now” obsession becomes the very thing that causes them to lose big later.

Finally, the curve ball. This is the most dangerous pitch of all. Hope Is Enough! Black boys filled with the illusion of hope sit and wait for the world to come to them. For a short time they spin forward through life like the threads of a curve ball but inaction suddenly drops them on a downward path toward their fate.

The true culprit for the decline of black boys in baseball

is an all-star pitcher with the name HISTORY stitched on it’s back. History continues to throw elusive pitches past Black boys whose experience and exposure not only cause

them to strike out in baseball, too often they strike out in life. This blog comes from the heart of a man who bleeds baseball. I’m in search of solutions that will preserve the future of the game I love. If you could wave a magic wand (or bat) what would you do to get more Black boys back into baseball? I invite you to disagree with me.
###