C.J. Stewart is an Atlanta native, a former Chicago Cubs outfielder and an Amazon #1 Best Selling Author (Living To L.E.A.D.: A Story of Passion, Purpose and Grit). He has earned the recognition of being one of the top baseball player development professionals in the country. As the founder and CEO of Diamond Directors, Stewart has achieved unmatched success in the player development industry. He has over 22 years of experience and his firm has developed some of the game’s top amateur, collegiate and professional players. Stewart’s impressive client list includes Jason Heyward (Chicago Cubs), Dexter Fowler (Los Angeles Angels), Andrew Jones (former Atlanta Brave), Peter Alonso (NY Mets), Kyle Lewis (Seattle Mariners), and Andrew McCutchen (Philadelphia Phillies).

Stewart grew up in one of Atlanta’s most dangerous apartment complexes, Hollywood Brooks, located on Hollywood Road. His story is a perfect example of the phrase, ‘where you start doesn’t determine where you finish’. Although statistically the odds were stacked against him, Stewart used the sport of baseball to overcome statistics and become a compassionate, engaged member of society. Through the help of kind strangers in his community, he was able to take his love for the game from John A. White Park all the way to Wrigley Field when the Chicago Cubs drafted him, not once, but twice in 1994 and 1996. 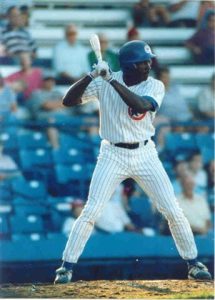 Now Stewart and his wife Kelli are doing the same for inner city youth in Atlanta through their non-profit organization, L.E.A.D. (Launch, Expose, Advise, Direct). L.E.A.D.’s mission is to empower an at-risk generation to lead and transform their city so they can become Ambassadors who lead Atlanta to lead the world. Stewart is providing a way for deserving inner-city youth to transform communities through baseball. For young men who complete L.E.A.D.’s Ambassador program, 100% have graduated from high school, 93% have enrolled into college, 90% have received college scholarship opportunities and 14% have entered the military or workforce. Stewart’s way of saying ‘Thank you!’ to those who helped him stay on the right path is to pay his blessing forward and create empowering opportunities for Atlanta youth today and into the future. 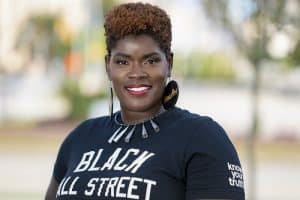 Kelli Stewart was born in Atlanta and raised most of her life in Oglethorpe County, a rural community just outside of Athens, Georgia. Although both parents were not a consistent fixture in her life, Kelli’s Grandmother, Ms. Amy Lou Faust, provided a stable and nurturing home environment where she raised Kelli to have an old soul that has served her well in life.

Kelli is a graduate from Cedar Shoals High School in Athens, GA and credits her participation in ROTC as keeping her on the mostly straight and mostly narrow. Through the watchful care and guidance of her ROTC Instructor, Sgt. Fincher along with Ms. Sue Lee (English Teacher) and Shirley Daniel (Guidance Counselor) Kelli graduated from Cedar Shoals in 1996 and went on to study at Georgia State University. She completed her undergraduate studies at Kennesaw State University in 2011 where she earned a Bachelor’s Degree from the Coles College of Business with honors. In addition to her degree, Kelli holds a wealth of knowledge regarding sport based youth development as a resource for social justice and the impact sports has on the social emotional development of youth.

Today, Kelli, and her husband, C.J. Stewart, oversee two business ventures that they started together. Through Diamond Directors, they train and develop some of the country’s top amateur and professional baseball athletes; Jason Heyward (Cubs), Dexter Fowler (Cardinals) and Tyler Flowers (Braves) are a few notable professional clients. Through L.E.A.D., they train and develop some of Atlanta’s hidden treasures in Atlanta Public Schools. L.E.A.D. provides inner city boys with the same opportunities to excel in life through baseball as the Stewarts’ Diamond Directors clients with he focus being accessing higher education and community leadership. To date, L.E.A.D. Ambassadors have achieved a 100% high school graduate ration 90% college enrollment rate, 93% scholarship rate (academic and athletic).